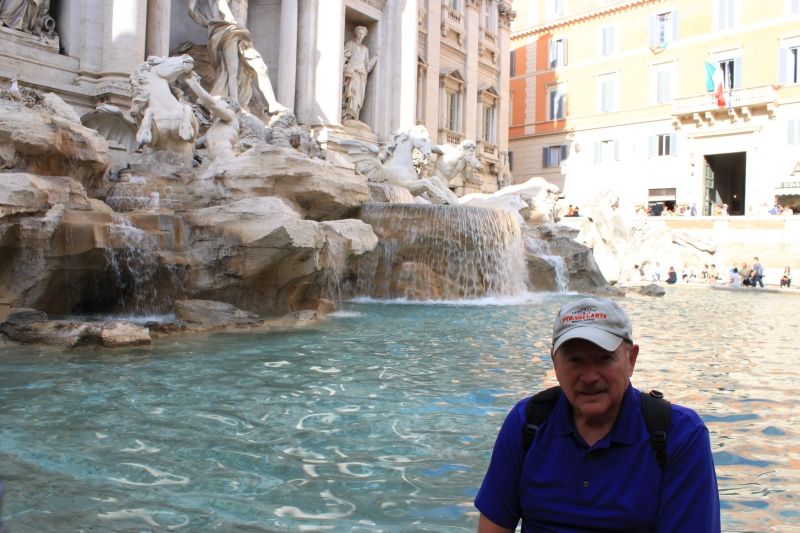 It may be apocryphal but Yogi Berra, the former N.Y. Yankee baseball player and master of malapropisms is credited with this quote about travel:

“I took a trip around the world last week, and you know what, it hates each other.”

I think I know what he was trying to say.

Fortunately, during my recent trip to Germany and Italy I didn’t encounter that notion. In fact, I found people in both countries pleasant, helpful and generally welcoming.

And that is saying a lot. After all, I am an American and Americans aren’t the most popular people in the world these days.

Europeans tend to blame the United States for their economic woes–something to do with the national debt crisis and its impact on markets everywhere, I believe. In Asia and Latin America, where I lived and worked as a foreign correspondent for several years, people see Americans as aggressive exploiters of cheap labor in search of profits at any cost.

Then, of course, there are Washington’s international political policies–never a popular topic of conversation no matter where you travel.

Today, I avoid those conversations by keeping my journalistic past a secret. That way I don’t have to spend precious minutes our even hours defending or explaining Washington’s policies. And what’s more, the almighty dollar isn’t quite as almighty as it once was. More on that later.

When approached with such comments, I simply say: “Boy, ain’t it the truth. Luckily for me I have a Southern California passport.”

During this trip not one Italian or German accosted me about America’s shortcomings–perceived or real.

Instead, they blew smoke at me…as in cigarette smoke.

It seemed as if everybody in Europe smokes. Non-smoking areas are essentially non-existent in many places–restaurants, bars, hotels, cafes, shops, etc. As a consequence, there is a lot of passive smoke floating around.

It’s not as if there aren’t warnings about the health risks of smoking. Graphic billboards and chilling messages on cigarette packs warn of impending doom if smoking isn’t given up. In Asia I once estimated that about 60-70 percent of men smoke and about 40 percent of women. In Europe it seemed as if about half the population smoked regardless of sex.

It is always dangerous to generalize about people. Americans get that a lot, as in “Americans are this” and “Americans are that,” when in fact, it is difficult to pin down any trait that can be called 100% American–unless it is a love of baseball, fast food and cars. Even then, that would be a stretch. I know a lot of people who hate baseball, never eat fast food and prefer public transportation when available.

Having said that, I feel I must generalize a bit here. For example, Germans love their beer. And for good reason. It is damned fine stuff. Must better than the mass-produced, preservative-laden swill that Americans call beer. (Of course, I am not including the hundreds of new micro breweries that have sprung up in the United States in the past 20 years or so. Those beers are almost as good as what you will find in Germany–and some may even be as good).

It just so happened, I was there for the opening of Oktoberfest. What an adventure that was! Perhaps a half million people crowded into Munich’s Theresienwiese area–all looking for a beer tent to visit.

Germans love their cars also–and no matter what kind of car it is, it must be a stick shift. None of those automatic transmissions in my BMW 700 series, thank you!
Why is that? “Driving in Germany is considered a kind of sport and shifting gears reinforces that feeling,” a German told me. I think I can understand that. When I was a kid I used to drag race. All of my cars had four on the floor. Automatic transmission? No way!

Now, on to Italy and more generalizations. Italians are definitely more friendly than Germans. Not that Germans aren’t friendly. It just takes a bit longer to get to know them. There is a coolness there–perhaps it is the climate.

Or perhaps Germans are still angry about all of those Roman legions that marched from Rome into places like Gaul and Germania 2,000 years ago to subdue the barbarians. In any case, going from Berlin to Rome in a day was eye-opening.

Maybe it was the hands. People in Italy talk with their hands in way that simply does not exist in Germany. By comparison, Germans keep their hands in their pockets. Not really, but it seems that way when you put an Italian and a German next to one another and tell them to start talking.

I don’t speak Italian. But by watching the hand signals, I felt I was learning the language. I do speak German and German is a difficult language to learn. I wonder how much easier it would be if Germans adopted the Italian way of using hand signals when they spoke?

Italians love to hug one another and kiss each other on the cheek. I like that. It is demonstrative of affection, if not always genuine. Nevertheless, it breaks the ice faster than a cold handshake or a nod.

Rome is a very big city. Yet, I found people there really friendly. Everybody is in a hurry, but they always had time to help out a lost American trying to figure out how to get back to the hotel or to some piazza or another.

Of course, about half the people I encountered in Rome seemed to be tourists like me. And like me, most seemed to be constantly looking at maps or asking directions. That’s OK. Rome is a great city to get lost in. No matter where you are or how far you walk, you will always come upon a wonderful outdoor cafe or some picturesque piazza where you can stop, have great meal, a coffee or a beer (and I must say, Italian beer is better than I expected).

In fact, it doesn’t really matter if you get lost in Rome.

As Yogi Berra once said: “If you don’t know where you are going, you will wind up somewhere else.”