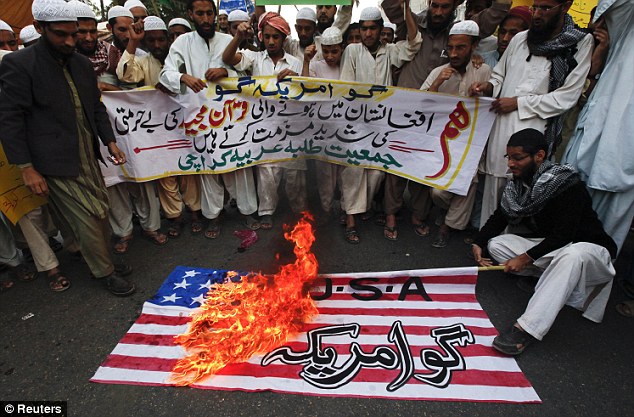 And the beat goes on in Afghanistan in the wake of the Koran burnings by American troops.
At least four Americans have been murdered by Muslim fanatics–and one of those fanatics was an Afghan cop on duty to protect American advisors posted to the Interior Ministry in Kabul.
Now the protests and violence have spread to Pakistan–another nation not worth the life of one American soldier.
Enough is enough.
I spent time in both countries when the Russians were still fighting in Afghanistan back in the late 1980s.
Even then I saw that trying to bring Afghanistan into what was then the 20th Century was an exercise in futility. Trying to bring it into the 21st Century is even more daunting.
This is a primitive, squalid land ruled by boorish religious fanatics who, to paraphrase our wonderful apology-prone president: “cling to guns or religion or antipathy to people who aren’t like them.”
Of course, Obama made those comments about small town Americans in Pennsylvania and the Midwest–not the religious zealots who are running around the streets of Afghan cities shouting Anti-American epithets.
My question when I see scenes like this: what the hell are we doing in this God-forsaken place?
The Afghan people don’t want us there–no matter how many schools and hospitals we build or infrastructure investments we make.
I recall going into Afghanistan with Mujahideen rebels who were fighting the Russians in 1987. During one conversation with the guerillas I was with the conversation turned to Russians.
‘We will kill them all if they don’t leave,’ one rebel named Ghorzang told me. ‘We want no foreigners in our country.’
‘What about Americans?’ I asked, figuring he might be less hostile to Uncle Sam because of the hundreds of Stinger missiles and other weaponry Washington had covertly provided to the Mujahideen to use against the Russians.
‘If Americans come, we will kill them also,’ he said.
‘That is not a very grateful attitude,’ I responded.
‘We owe no gratitude to infidels,’ he said. The Koran says: “Fight and kill the disbelievers wherever you find them, take them captive, harass them, lie in wait and ambush them using every stratagem of war.”
I was not willing to let the conversation end there.
‘So, if America helps the Mujahideen defeat the Russians, you feel no sense of indebtedness at all?’ I asked.
‘Not if they are unbelievers,’ he replied.
At that point I had serious reservations about what we were doing to help the Afghanis defeat the Russians. Today I am convinced that this wretched land with its religious intolerance, its inept political leadership and a population that cares little about the blood spilled by Americans in the cause of freedom should be left to its own devices.
Allowing it to sink deeper into its own cesspit of 8th Century values would be doing the world a favor.
As the week was ending last week Afghan President Hamid Karzai’s office demanded that NATO put on public trial those who burned copies of the Koran at a NATO base.
What about the Afghani cop who killed those two American officers in the Interior Ministry? I suspect he is being hailed as a hero and no doubt is being protected by someone–possibly “peace-loving” mullahs and imams or perhaps someone in Karzai’s government.
Those soldiers need not be put on trial. In the first place the books they burned had already been defiled by secret messages written in them by Taliban captives. Secondly, since when did book burning become a capital crime? And why is the Koran any more sacred than the Old Testament or the writings of Buddha?
I have to think that in the Status of Forces agreement between the U.S. and Afghanistan burning the Koran is not listed as a felony. 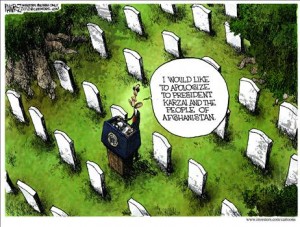 If President Obama, the Great Apologizer, wanted to show any leadership at all in this issue, which he apparently doesn’t,  he would bring not only those soldiers home who burned the Koran, but all of our troops who continue to be in harm’s way in a fetid land where they are neither wanted nor appreciated.
The Pentagon might even consider giving the Koran burners a medal–along with all of the soldiers, who have risked their lives for a people, who: “owe no gratitude to infidels.”