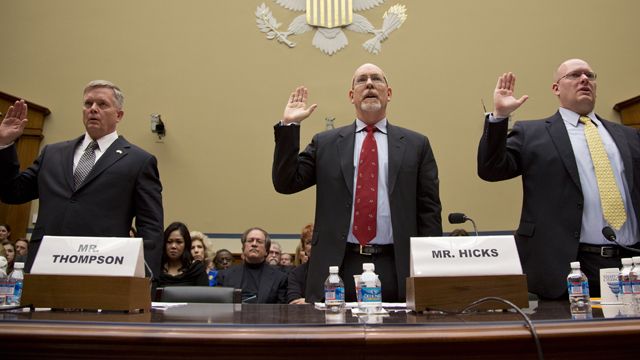 This will be short. About as short as the way the American media have covered the whistleblower testimony on the Sept. 11, 2012 attacks on the U.S. consulate in Benghazi, Libya in which four Americans, including the U.S. Ambassador were murdered.
First, let me say I am fully disgusted by the lack of coverage of this hearing. Only Fox News has given the riveting testimony Wednesday by the three whistleblowers the kind of air time this hearing deserves.
Gregory Hicks, the former deputy chief of mission in Libya and the highest ranking official in the country at the time of the attacks, confirmed that there was, in fact, a firm “stand down” order given after the U.S. compound in Benghazi came under attack. Hicks testified that he was “effectively” demoted shortly after questioning talking points that later proved to be demonstrably false. Hicks also revealed that he was told not to speak with an investigating Rep. Jason Chaffetz (R-Utah) alone.
The two other whistleblowers, Mark I. Thompson, a former U.S. Marine and currently the Deputy Coordinator for Operations in the State Department’s Counterterrorism Bureau and Eric Nordstrom, a Diplomatic Security officer who was the top security officer in the Libya  in the months leading up to the Benghazi attacks were almost completely ignored by media coverage.
While Fox News provided almost wall-to-wall live coverage of the testimony, CNN devoted about 15 minutes to the hearings–preferring to hype the Cleveland abduction story. When MSNBC decided to cover the hearings it brought Democrat Elijah Cummings on who immediately dismissed the entire affair as an attempt to “launch unfounded accusations and smear public officials.”
None of the three networks, NBC, CBS or ABC broke into regular programming to air any of the hearings. On its nightly news show, liberal maven and Hillary Clinton devotee Andrea Mitchell dismissed the hearings with this quip: “There is an obvious political undercurrent. Republicans are taking direct aim at Hillary Clinton, the country’s most popular Democrat and a possible presidential contender.”
ABC provided less than a minute of coverage and CBS’s Sharyl Attkisson, who provided a balanced one minute report on the hearings, has been accused by CBS executives of ‘wading dangerously close to advocacy on the issue.’ Why, because she apparently feels the hearings and the entire Benghazi episode deserve at least as much coverage as the murder trials of Jodi Arias and Philadelphia abortion doctor Kermit Gosnell.
Republican Rep. Steve Stockman of Texas tweeted just before Arias was found guilty of first-degree murder: “Right now Jodi Arias is regretting not killing an ambassador or a Philadelphia infant,” the implication being that not only would the media not cover her trial, but would probably do its best to help her go free.
To see journalists more concerned with protecting President Obama and Hillary Clinton than finding out the truth about an attack that killed four Americans is truly disgraceful. It makes me wonder what kind of future my chosen profession has in this country.
Journalists are already viewed with suspicion by the public. When news organizations decide to cover stories based on partisanship, rather than on their traditional responsibility as “watchdogs” of government, our democracy is in big trouble.
After the 1972 break-in of the Democratic National Committee headquarters at the Watergate office complex in Washington D.C. we know the Nixon administration attempted to cover-up its involvement. The media were relentless in their pursuit of Nixon and his cronies and eventually the hearings and the media coverage forced Nixon’s resignation.
In Benghazi, unlike Watergate, there were four deaths. Instead of outrage that Ambassador Stevens and three others were murdered, the media are towing the line of the Obama administration and keeping a lid on the entire affair. Where are the Woodward and Bernsteins of today?
And then there is the former Secretary of State Hillary Clinton who goes before the January Benghazi hearings and in response to a question of whether or not the State Department knew if the attack on the consulate was a spontaneous demonstration or a coordinated attack by terrorists, says heatedly: “At this point, what difference does it make?”
What difference does it make? How about who was giving the orders in the State Department regarding security in Benghazi and what the president knew and when he knew it? And how about our ambitious ex-secretary of state who is angling to be our next president?
The answers that may come from this hearing, despite the media’s obvious stratagem to ignore them, will undoubtedly tell us what difference it makes.