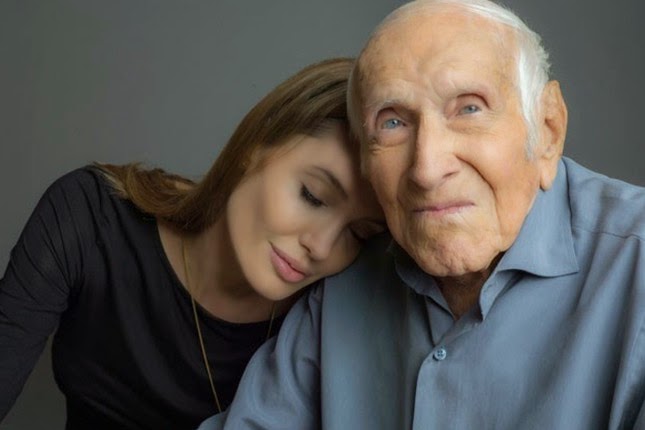 ‘Unbroken,’ Angelina Jolie’s film about the inhuman treatment of Allied captives in Japanese prisoner of war camps during World War II, is angering some Japanese who are calling for a boycott of the film in Japan.
The film, which opens Christmas day in the U.S., focuses mainly on the story of Louis Zamperini, who survived more than two years of horrendous treatment at the hands of his Japanese captors.
It is based on Laura Hillenbrand’s bestselling book, “Unbroken,” which detailed Zamperini’s life as an Olympic athlete, his wartime role as a bombardier on a B-24 and his eventual capture by the Japanese after his plane was shot down.
Zamperini, who died this past July at the age of 97, forgave his captors for their merciless treatment of him and other POWS, but many Japanese are still unwilling to admit the atrocities their troops committed throughout Asia during World War II.
This is not the first time a film about Japanese atrocities has sparked outrage in Japan.
In 1990, when I was the Chicago Tribune’s Chief Asia Correspondent, I wrote about a graphic Australian film entitled ‘Blood Oath.’
That film enraged Japanese Nationalists who still deny that the Imperial Japanese Army committed any wartime crimes–including the slaughter of some 200,000-300,000 Chinese civilians and unarmed POWs in the former Chinese capital of Nanjing in 1937.
‘Blood Oath,‘ which was released in the U.S. under the title ‘Prisoners of the Sun,’ depicts the plight of Allied POWs from 1942 to 1945 on the Indonesian island of Ambon. Ambon was the site of one of Japan’s most infamous prisoner of war camps. Of the 1,150 Australian, Dutch and American POWs interned on the island, fewer than 300 were still alive when British and Australian troops retook Ambon in 1945.
When they did, they made the grisly discovery of 314 decapitated POWs in one mass grave–beheaded by Japanese soldiers wielding razor-sharp samurai swords.
At the Australian War Crimes Tribunal held on Ambon in 1946 about half of the 91 Japanese officers and enlisted men accused as war criminals were convicted and given death sentences or long prison terms.
“Most young Japanese today don’t even know that Japan fought a war against the United States, let alone about what happened in Ambon,” says Toshi Shioya, the Japanese actor who portrayed a soldier convicted and executed for war crimes committed on the Indonesian island of Ambon.
Shioya not only acted in the film, but worked tirelessly to get it released in Japan.
“This was the first film ever shown in Japan that actually portrays ordinary Japanese soldiers as accomplices in war crimes,” Shioya said. “We were lucky to find a distributor willing to show the film because for many Japanese, this was a shocking motion picture.”
Unlike ‘Prisoners of the Sun,’ Jolie’s ‘Unbroken’ is yet to be released in Japan. And while some Japanese may decry the film’s portrayal of Japanese cruel treatment of Allied POW’s, it is impossible to argue with the facts.
U.S. Department of Defense figures show that almost 40 per cent of all Americans taken prisoner by the Japanese died in captivity while just 1 per cent of American POWs died in Germany prisoner of war camps.
But unlike Germany, Japan’s wartime iniquities have gone largely unpunished. There have been no Simon Wiesenthals to hunt down Japanese war criminals, and only a relative handful of Japanese military leaders were put on trial for atrocities.
As a result, generations of Japanese have grown up with only the sketchiest knowledge that Japan may have done something wrong in the 1930s and 1940s and that the bombings of Hiroshima and Nagasaki were considered by many to be justifiable retribution.
Anti-Japanese feeling still exists in places like China and Korea where the heavy boot of Imperial Japan was most in evidence. In 1990, during a visit to Japan, then South Korean President Roh Tae Woo received an apology for Japan’s 35-year occupation of the Korean peninsula from Emperor Akihito, the prime minister and parliament. But for many Koreans, none of the apologies went far enough.
“Human beings tend to be sensitive to and vividly remember their own sufferings,” said Takashi Koshida, author of a two-volume work about the Japanese army’s activities in 16 Asian nations during the war.
“In the case of the Japanese, the sufferings were the atomic bombings, the air raids and the military conscription. I would say it has taken almost 60 years for the Japanese to realize that they were aggressors . . . and that they caused other people to suffer.”
One group of Japanese for whom ‘Prisoners of the Sun’has particular significance is the Ambon Remembrance Society, an organization of 100 Navy veterans who served as guards in the POW camp.
“After I watched this film the first time I felt as though I had swallowed lead. . . . I felt very heavy and dark inside,” said Yoshiro Ninomiya, a former Navy sub-lieutenant assigned to the camp.
Ninomiya, who is the society’s secretary-general, has seen “Blood Oath” five times, and he said, “It has made me think about a lot of things (that happened on Ambon).”
Shioya has spent long hours talking with former Japanese soldiers who served at the camp.
“One man still has nightmares about what he did on the island,” Shioya said. “This man, who served a 15-year prison sentence after the war, told me of how one day in 1943 he was ordered to decapitate three captured American pilots with his sword.
“As his sword passed through the neck of one pilot, photographs of the man’s mother, his wife and a baby fell out of his shirt pocket and lay on the ground staring up at him.  “He is still haunted by that scene today.”
Check out these links for a trailer on Prisoners of the Sun and a synopsis by imdb.
http://www.imdb.com/title/tt0100414/
http://www.imdb.com/video/imdb/vi3165585689/