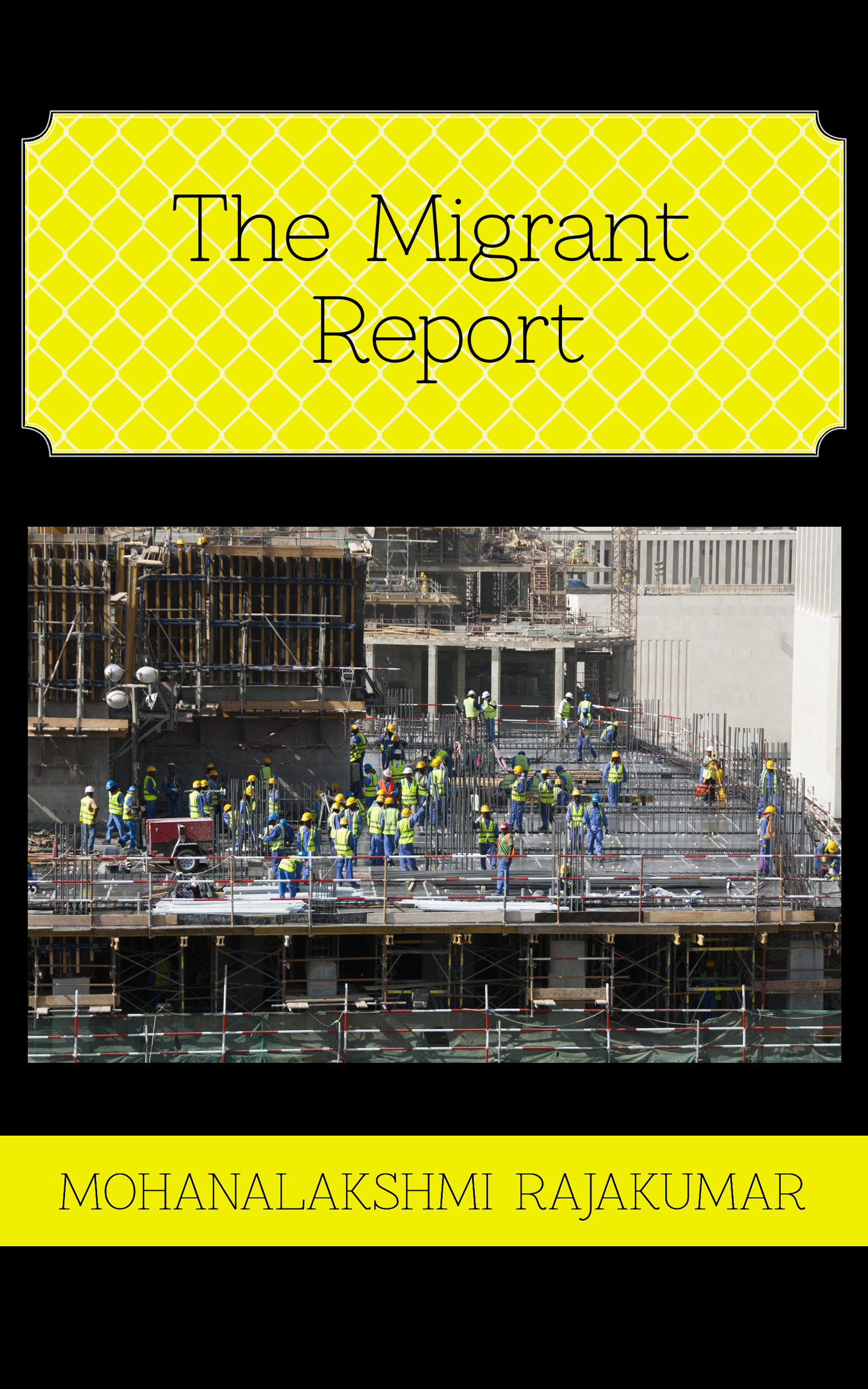 Periodically, my blog participates in virtual book tours which allow authors to showcase their books to a broader audience. Today I am hosting fellow author Mohanalakshmi (Mohana) Rajakumar  whose new novel The Migrant Report releases tomorrow (July 8) and is available on Amazon. The book descriptions and biographical information are provided by the author.

(NOTE: BECAUSE OF A RECENTLY DISCOVERED VULNERABILITY IN THE CORE WORDPRESS SOFTWARE AND PLUGINS, COMMENTS ARE CURRENTLY DISABLED AS A SECURITY MEASURE. THE COMMENTS FEATURE WILL BE RE-ENABLED AS SOON AS POSSIBLE. IN THE MEANTIME YOU MAY DIRECT COMMENTS TO MY E-MAIL ADDRESS: jhawker69@gmail.com.)

Book One, Crimes in Arabia Series 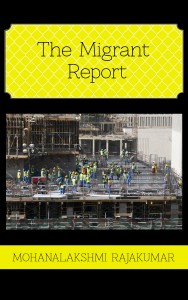 Against the glittering high-rises of the capital, Manu, a recent arrival from Nepal, drips his days away on a construction site, cut off from the world outside the labor camp. His sister despairs of finding him among the thousands of migrant workers flooding into the Arabian Gulf to build the country’s infrastructure. Manu and Sanjana must keep their younger siblings out of poverty, even if at their own expense.

Police captain Ali’s hopes of joining the elite government forces are dashed when his childhood deformity is discovered. His demotion brings him face to face with a rising pile of unexplained dead bodies and also an aspiring journalist who is unlike any local girl Ali knows. In danger of flunking out of university, Maryam is searching for an original story that will appease her professor and keep her family’s machinations for marriage in check.

Can the unlikely trio fit the pieces of the puzzle together before agency thugs get to Manu?

Mohanalakshmi (Mohana) Rajakumar is a South Asian American who has lived in Qatar since 2005. Moving to the Arabian Desert was fortuitous in many ways since this is where she met her husband, had two sons, and became a writer.  She has since published eight e-books, including a memoir for first time mothers, Mommy But Still Me; a guide for aspiring writers, So You Want to Sell a Million Copies; a short story collection, Coloured and Other Stories; and a novel about women’s friendships, Saving Peace.

Her coming of age novel, An Unlikely Goddess, won the SheWrites New Novelist competition in 2011.

Her recent books have focused on various aspects of life in Qatar. From Dunes to Dior, named as a Best Indie book in 2013, is a collection of essays related to her experiences as a female South Asian American living in the Arabian Gulf. Love Comes Later was the winner of the Best Indie Book Award for Romance in 2013 and is a literary romance set in Qatar and London. The Dohmestics is an inside look into compound life, the day-to-day dynamics between housemaids and their employers.

After she joined the e-book revolution, Mohana dreams in plotlines. Learn more about her work on her website at www.mohadoha.com or follow her latest on Twitter:@moha_doha.

Please tell us in one sentence only, why we should read your book.

If you have been reading the headlines about building stadiums for the 2022 World Cup, then read about the men who were building cities in the Middle East long before FIFA took an interest.

What do you like to do when you’re not writing?
We have a young family with two children under the age of five so life is full of swimming, tennis, gymnastics, and sticky handshakes.

What advice would you give to someone who wants to become a published author?

Write whenever, wherever, about whatever you can. Write often and revise twice as often. This is the only way to find your voice and your style as a writer.

Do you write full-time, or do you have a day job as well?

I teach writing and literature at overseas American universities. Whether it’s fiction or academic articles, I am always writing.

What do you think makes a good story?

If there is a character I care about that is going to lose everyone and everything that means something to him/her, then I am turning the pages until I find out that s/he was victorious.

Is there anything that you find challenging in your writing?

Every book is like standing on the diving board for the first time. You are standing there; sure it will hurt, while everyone is telling you to hurry up. The plunge and feel of the water is exhilarating.

If you could have dinner with 1 person, dead or alive, who would it be and why?

Princess Diana. I know that sounds really strange but for a contemporary person she was so complex and interesting: I would want to know what she was thinking in those final moments.

If you had to compare yourself to an animal, which one would it be? Why?

My husband and I joke about my howler monkey mode; this is when I feel I’m not getting the results I need from the person I’m interacting with and have to go into overdrive. Usually, when I’m done, the situation is resolved.

If you had to have one word or phrase written on your forehead for an entire week, what would it be?

Patience. I tell our boys all the time how important it is; we tend to forget as adults.

What is the best advice anyone has ever given to you?

Resilience takes the long view. Whenever you feel overwhelmed, take a deep breath, and if you can (or need to) take a nap. Nine times out of ten, you’ll feel better.

EXCERPT FROM THE BOOK

Manu knelt, bowing his head to his mother’s feet for what might be the last time, the bluish-green veins on the back of her hand trembling under his lips as if the pulse of life inside her were buoyed by his. If this were a Bollywood movie, he forced himself to think of the scene in less personal terms, the music would be slow and reedy, the camera panning out to a doe-eyed girl, crying about the devoted son. He clutched the fine bones of her hand until his mother turned in her sleep, the slope of her nose pressing into the pillow, her restless limbs tossing on the woven mat on the dirt floor.

Her sari rode up to reveal her calves, the ant bites scattered like the moon’s craters across her muscles. This wasn’t a Bollywood movie. He was no hero who could strengthen his mother’s aging body. The veins around her ankles were the twisted roots of an ailing tree. His sister, Meena, wrung a stained handkerchief and dabbed the frail forehead.

The driver of the microbus beeped, this time long, the high-pitched bleat of a wounded animal.

“I’ll send something as soon as I can,” Manu said. The sight of his mother’s feverish petite frame filled his vision, dominating the small cement structure that was home to five of his siblings and their mother.

Turning so his younger siblings would not see the tears slipping out the corner of his eye, he made for the low-ceilinged entrance. The youngest ones, Raju and Ram, the unlikely fruit of his mother’s dwindling years, clutched at each of his knees and whimpered. They were six years old.

Outside, the horn sounded again, causing their cow to give a low bleating answer. Their family, like most in their village, had fresh milk, and a garden fertilized by homemade manure.  His siblings could grow up the way he had, on a plentiful vegetable garden, playing in the long grass, and doing household chores, living from their eldest sister’s wage, a replacement for their deceased father’s business.

His mother’s long illness had drained their resources. The shadow of the Maoists lingered, the tendrils of fear reaching all men of Manu’s age.

“Soon.” Meena repeated the word, her lips pressed tight. She nodded as if this were a guaranteed date. “We used Didi’s salary for the medicine.”

Meena had been a child when her older sister had gone off to work. She was still too young to manage a household, but there was no one else. She followed him to the front wheel of the microbus with his bag. He didn’t have much to take for his job as an office worker, but that was good, because more would not have fit in the passenger area.

“Say hello to Didi for us.” Meena handed off the bag and attempted a half-smile.

“I’ll tell her first thing.” He ducked into the cab’s once-cream interior. The driver hacked a cough, opening his door to spit.

“How long?” Manu asked, though he knew the answer. “How many stops?” His mother would have chided him for his incessant questions.

“Two hours,” the man grunted, picking his teeth with a splintered toothpick.

The tears flowed unchecked. Manu turned to the side, the hot breeze little comfort as the microbus bumped the unpaved road from his village to the bigger one next door. To the bus station that would take him to Kathmandu. To the airplane that would take him to his new life. A life that would allow him to revive his mother from subsisting on the meager vegetables of their garden.

He dozed off, despite their halting progress over uneven dirt roads.

“Make room,” the driver said. The microbus slowed to a stop.

A man in a button-down shirt, hair slicked with oil, eyes wide with promise, boarded the auto. Manu slid behind the driver, putting his feet on either side of the bag.

“Great day for a journey!” His companion bounced on the seat like one of the twins. Manu offered a smile that didn’t raise the corners of his lips. The auto began again. The driver coaxed the vehicle ever faster, which was more difficult to do now with the added weight.

Hitesh shared a continuous stream of thoughts. This was the furthest he had ever gone from his village. How, he contemplated, did airplanes manage to stay in the sky? He wondered if he could learn to cook quickly enough to avoid starving.

These preoccupations had occurred to Manu as well in the months preparing for his new job as an office worker in the Gulf state, but he had an ace card that Hitesh lacked. Manu’s eldest sister, Sanjana, had been working abroad for years. Her salary had kept the family afloat, at least until their father had been killed.

Manu could have joined the army or started a shop with the leftovers of his father’s trading connections and risked the Maoists’ wrath. These had been Manu’s choices once the Maoists had gotten hold of his businessman father trading in a village west of Butwal. As he had contemplated the options, Nepal’s civil war ripped away any sense of security.

“You know my family, they pay everything for me to have this job.” Hitesh bounced on the seat with the jolts from the potholes. May as well have been with excitement, Manu thought wryly.

“I have to borrow money to get my ticket, and to pay for finding the job, and even this bus ride.” Hitesh ticked these off on his fingers. His calculations were staggering.

“How will you pay this?” Manu asked, despite himself, drawn into the conversation.

Hitesh shrugged. “The man from the agency say they will take it from my salary, until debt is finished.”
Manu looked out the window. He hoped his relief didn’t show. Sanjana had been saving money for him for several years. Well, for him to go to university in the capital, to study, become educated, like their father would have wanted. The money had gone to pay for all these fees that Hitesh was outlining, using up most of their savings. There were worse things than not attending university, Manu thought. Like being in debt to a company you didn’t know.