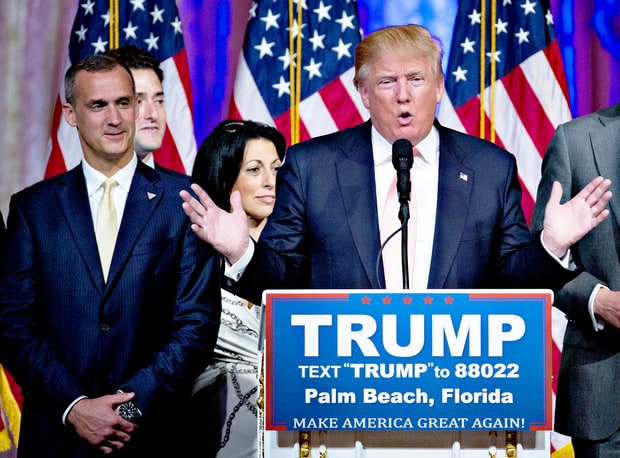 Many years ago while covering a demonstration in one of Chicago’s parks a number of reporters, me included, were caught in the middle of several dozen surging cops armed with truncheons and tear gas.

As we retreated before the scrum some of us were knocked to the ground and a few of us got clobbered.

Among the victims were four women reporters, three of whom suffered cuts, bruises and at least one bloody nose.

Afterward, not one of those women complained or even hinted about a law suit against the City of Chicago. Neither, I should point out, did any of their male counterparts.

That was the job and sometimes you took your lumps doing it.

After watching and listening to the bleating and whimpering surrounding the alleged assault on Michelle Fields by Donald Trump’s campaign manager Corey Lewandowski, I have to wonder what the hell has happened to reporters.

When I look at the video of Fields being grabbed by the arm by what appears to be Lewandowski as she tried to ask Trump a question I am struck by the utter pettiness and insignificance of that act.

How many times in my career covering various forms of mayhem from riots to chaotic demonstrations was I buffeted, pushed, shoved, kicked, gassed, and punched? Let me count the times.

No, I can’t. There are too many to count.

Yet, today when a female reporter is tugged away from a presidential candidate who she herself had grabbed by the arm, it is viewed as a transgression that some media pundits would have you believe borders on attempted murder.

Give me a break. What is really happening here is what a lot of us have been witnessing for decades, namely the “wussification” of journalism.

God forbid that a reporter should be touched, grabbed or shoved by a news source or by anybody in authority.

Apparently many of today’s self-important, imperious reporters somehow believe they should be unassailable and immune to any form of physical contact—even when they are in the middle of a jumbled, disorganized mob, as was the case with Ms. Fields when she had her close encounter with Donald Trump and Lewandowski.

Given the fact that 90 percent of the mainstream media loathes and despises Trump, it was little wonder that the story of Ms. Fields trivial affront quickly escalated into a narrative verging on an unspeakable thrashing by a brutish thug from the goose-stepping Trump campaign.

“What is our world coming to when a vulnerable female reporter can be manhandled in such a despicable fashion?” blubbered one pundit.

Maybe it’s just me, but I am a lot more concerned about the Islamic savages who just blew up dozens of innocent men, women and children people in Brussels, Belgium and Lahore, Pakistan than I am about a fragile reporter who got jostled while trying to interview a presidential candidate inside the highly secure ballroom of the Trump National Golf Club.

I will end with this bit of advice for Ms. Fields and today’s other hubristic reporters who relish becoming the story instead of covering it. Don’t ever allow yourself to believe that the most important thing about any story is the fact that you have arrived to cover it.

Learn to take your lumps, Ms. Fields. And if you can’t then maybe you should consider a different line of work. Poetry comes to mind.

Of course, who am I to talk? In the eyes of today’s fragile and delicate reporters, archaic hacks like me are readily dismissed as churlish troglodytes.

Not to worry. I bear that appellation with pride.