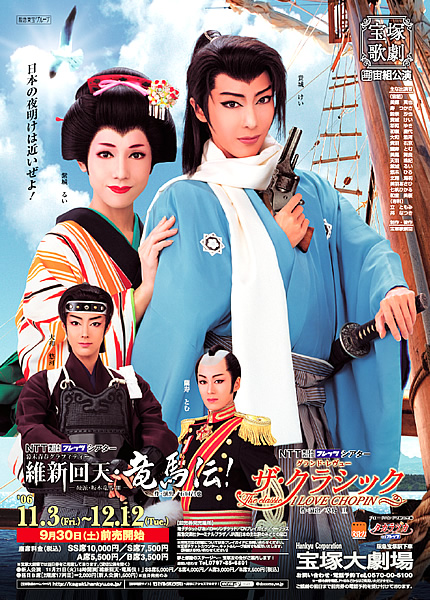 (Periodcially, I post stories I wrote while working as a foreign correspondent. The following story is a feature on Japan’s unique Takarazuka Theater where unmarried women play all the roles. Ron Yates)

It is late afternoon and 18 teenage girls, wearing simple jackets and long, gray flannel skirts that reveal just the barest trace of their white cotton stockings, file across the “bridge of tears” spanning the Muko River.

The girls in their demure, street-length costumes look like they have marched right out of 1914. In a way, they have.

On the other side of the bridge in this small town in western Japan lies the 101-year-old Grand Theater, home of Japan’s all-female Takarazuka Revue Company and one of the most tradition-bound institutions in this nation of 125 million.

Those who have read James A. Michener’s 1951 novel “Sayonara” know exactly what Mayumi is talking about. The heroine of the book, a Takarazuka actress named Hana Ogi, sacrifices her happiness by declining to marry the American Army major she deeply loves, to dedicate herself to the Takarazuka.

It is an immutable rule that a Takarazuka girl must leave the company if she marries.

It is something that the 85 specially selected girls attending the grueling two-year Takarazuka music school already have come to grips with-as have all the members of the Takarazuka Revue Company.

It has been that way since the theater was started in 1914 by Ichizo Kobayashi, a Japanese businessman and politician who founded the Hankyu Electric Railway Co., forerunner of Japan’s Hankyu Corp.-one of the nation’s largest private corporate conglomerates.

What began as a troupe of 15 women hired to sing and dance for Japanese who were lured on weekends from Osaka to suburban Takarazuka’s hot springs and amusement park via the Hankyu Railway has grown into four troupes totaling 360 “Takarasiennes.” They are supported by 300 instructors, producers, directors, writers, costume designers, and stage and lighting technicians, as well as two 35-piece orchestras.

Since Kobayashi introduced his all-female Takarazuka Revue as a counterbalance to Japan’s all-male Kabuki theater, more than 100 million Japanese have watched the lavish, brassy, campy and sometimes kitschy performances that combine bits of Busby Berkeley, flashes of Florenz Ziegfeld, elements of European operetta, samples of Japanese classical dance and fragments of Viva Las Vegas (with the feathers, but without the toplessness).

The revue, which is broken into four troupes called Flower, Moon, Snow and Star, does eight major productions at the Grand Theater in Takarazuka and seven at the Tokyo Takarazuka Theater each year.

That schedule was altered a bit last October when the Takarazuka Revue Company made its first American appearance in 30 years with six sold-out shows at New York’s Radio City Music Hall.

What the bemused but appreciative American audiences saw was peculiarly Japanese entertainment floating in a sea of sexual ambiguity that has delighted Japanese audiences for seven decades.

With women playing the roles of men on stage (even to the point of wearing mustaches and goatees) Takarazuka musical adaptions of Western musicals such as “West Side Story,” “Kiss Me Kate” and “Guys and Dolls” as well as Western literature such as “Gone With the Wind,” “A Tale of Two Cities” and even “War and Peace” unfold on stage with eye-popping energy.

Nevertheless, Takarazuka, like sashimi and sushi, can be a bit daunting to the American palate at first.

Women who play men (called otokoyaku) have been trained to shove their feminine voices down as many octaves as possible and belt out tunes with as much male lustiness as their feminine genes will bear.

What emerges is often a kind of semi-virile warbling that falls between a weary Robert Goulet and a pubescent boy going through the agony of voice change. Women pretending to be men as they prance about the stage wearing adhesive facial hair, tuxedos and top hats takes some getting used to. But once you do get used to it, you cannot help but be struck by the general competence and talent arrayed on the stage.

That prowess and stage savvy are no accident, says Keiko Miho, 20, one of the latest crop of graduates from the Takarazuka Music School, where the motto “modesty, fairness and grace” is drummed into the heads of students.

Like her 40 classmates, Miho, from nearby Osaka, was chosen from about 850 girls who auditioned for a panel of Takarazuka judges two years ago. Like other applicants to the Takarazuka school, Miho had to pass a singing test, do sight reading of musical scores, then danced, impromptu, to a choreographer’s instructions.

But getting into the school was easy compared with what she endured for the next two years. First-year students, called “juniors,” are not allowed to wear makeup or curl their hair and must cut it or braid it in back.

Their temperate school uniforms are closer to the 1890s than the 1990s. When they meet an upper class “senior” or Takarazuka Revue member, they must bow and move quickly out of the way.

“You get up every morning before 7 and if you are a junior you clean the school and dormitory until about 8:30,” Miho recalled.

“Then, seven hours a day, six days a week you have classes in drama, ballet, tap dancing, koto (a zitherlike stringed instrument), classical Japanese dance, musical theory, piano, samisen (a banjolike stringed instrument) and voice. It’s physically demanding and tough. But the one thing that keeps you going is the realization that after two years you will be finished and will be on the stage.”

Not quite. In their first year as full-fledged members of the troupe, music school graduates are known as “debutantes” and find themselves on the bottom rung once again, working as stagehands or taking bit parts as walk-ons. By the time they graduate, they also have been assigned their sex in the tightly controlled world of the Takarazuka-either as otokoyaku or as female-role players (musumeyaku).

It is a peculiar aspect of the Takarazuka that it is the smaller number of male role players (there is one “male” lead for each troupe) who attract the most fans-usually young girls and middle-aged women who see the otokoyaku as perfect gentlemen: safe, sexless, delicately handsome and cloaked in a veil of romantic fantasy.

“We tried to introduce men to the Takarazuka stage, but our audiences hated it,” said Masao Hashimoto, a producer who has been with the theater since 1956. “We finally stopped trying just after World War II.”

Every day, usually before 9 a.m., young girls, middle-aged women and even wealthy dowagers armed with video cameras and autograph books begin collecting outside the revue’s theaters in Takarazuka and Tokyo, hoping to catch a glimpse of one of their Takarazuka favorites.

Many of the stage door Joannies belong to the 50,000-member “Takarazuka Tomo no Kai” (Friends of the Takarazuka), but all who gather outside the theaters are known in Japan simply as “zukas.”

Young women who aren’t yet women go to see-and moon over-men who aren’t really men,” wrote Tadashi Usami, author of a history of the Takarazuka Revue.

“Women start going to Takarazuka in their early teens, at a time when they are aware of the existence of men but not yet ready for sex or even dating. Takarazuka offers them a safe introduction to the opposite sex.”

Mizuki Oura, a 13-year member of the Flower Company and one of the Takarazuka’s most popular male role players, sees nothing anomalous about her “maleness” on stage, though she admits that it is sometimes disconcerting when men and women refuse to recognize her real sex.

“I am a woman and some day I want to get married,” Oura said. “Yet many who see me on stage in the role of a man regard me as a man. They suspend reality.”

In her case, Oura, who joined Takarazuka as a 15-year-old trainee, made that suspension a bit easer when a few years ago she became the first Takarazuka otokoyaku to wear a goatee on stage (in “Kiss Me Kate”).

“Oura-san is my favorite,” gasped 13-year-old Hideko Miura of Osaka as Oura and her leading lady, Mito Hibiki, left the Grand Theater in Takarazuka. “She is so . . . powerful . . . so unique.”

Takarazuka’s uniqueness in Japan was brought to the public’s attention in 1987 when a former Takarazuka actress named Hiroko Hayashi was elected to Japan’s Upper House of Parliament and began pushing for tax-exempt status for the revue.

“Takarazuka is very special in Japan and actually it is unique in the world,” Hayashi said. “For that reason it deserves the same tax-exempt status as other traditional Japanese art forms like Kabuki and Noh theater.” Kabuki theater, in which men play all roles, is exempted, so why not a theater in which women play all roles, she asks.

Although Hayashi’s dream of giving the 100-year-old Takarazuka the same status as Japan’s centuries-old Kabuki and Noh theaters was cut short when she lost in 1990’s Upper House elections, she has not given up the idea and still pushes it whenever she has the chance.

“Takarazuka changed my life; it made me strong and gave me the guts you need to survive, not only in politics but in life,” Hayashi said.

“Mr. Kobayashi, who founded Takarazuka, always said that Takarazuka made the best oyomesan gakko (bridal school). And he was correct. But to me, Takarazuka was also a school of life.”

Hayashi, who left Takarazuka in 1957 to marry Senjaku Nakamura, one of Japan’s top Kabuki actors, insists that giving Takarazuka tax-exempt status like that of Kabuki would guarantee its future when so much of Japan’s culture is vanishing in an increasingly high-tech world.

Indeed, Takarazuka seems almost like a reaction to the smugness of modern Japan, where sophistication and wealth have become prime pursuits and where some Japanese lament what they insist are the increasingly blurred male-female roles in Japan’s culture.

It is a theme of the Takarazuka’s most popular stage show ever-a musical drama based on an 82-week Japanese comic-book series called “Berusaiyu no Bara” (“The Rose of Versailles”) set in the French court at the time of the French Revolution. The stage drama, which first ran from 1974 to 1976, then again in 1988-89 and which drew an audience of about 4 million, centers on a royal guard commander who is really a girl who was reared as a boy and who disguises herself as a girl to woo a Swedish count away from Marie Antoinette in an effort to derail some political intrigue in the Palace of Versailles.

The premise is perfect for the largely female Takarazuka audiences, because it provides them with a certain sense of sexual justice in a society where women have yet to achieve any major political power.

Takarazuka audiences sometimes come close to losing their storied Japanese reserve, as when these lines were delivered by a disgusted duchess:

“Men! I’m totally bored with them. Sticky as oil, to say the least. Inconsiderate and ever hungry for more power, conceited animals!

What men are not and what they never will be, apparently, are members of Takarazuka. And for the elite group of 3,380 women who have passed through the Takarazuka’s school and appeared on its stage since 1914, that is just fine.

“Takarazuka belongs to us and we don’t need men changing its character,” said “zuka” Yoshiko Himeno as she stood outside the Takarazuka Grand Theater.

“Well, maybe when Japan gets a woman prime minister, then we might consider allowing men to become members of the Takarazuka.”

(Click on the following links to see a sample of Takarazuka)