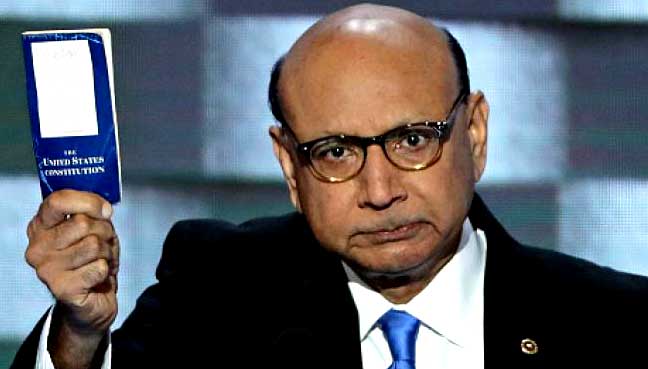 Occasionally I post commentaries from others on my blog—especially when they have relevance to the critical issues of the day.

Today, I am re-posting a commentary from Ray Starmann, a former officer in the U. S. Army and Iraq War veteran. His open letter to Khizr Khan appeared in U.S. Defense Watch, a blog that focuses on American defense and military issues as well as the global war on terrorism.

Like millions of other Americans, Starmann watched as Khizr Khan spoke at the Democratic National Convention last week. Much of Khan’s speech was about his family’s experience as Muslims in America and about his late son, a Captain, who was killed in 2004 in Iraq while serving with U.S. forces there.

But it was also a stinging attack on Donald Trump apparently orchestrated by the Clinton campaign and the DNC to belittle their Republican opponent.

And Trump, as is his habit, took the bait and responded to that attack. Subsequently, the media pounced on him for daring to do so.

I will not get into the media feeding frenzy that resulted from Trump’s comments. Suffice it to say; Trump could have been more measured in his response by saying simply:

“I am sorry for your loss, Mr. and Mrs. Khan. I have the utmost respect for the sacrifice your son made so your right to speak freely and openly, as you did at the DNC, is preserved.”

I, like millions of Americans saw your speech at the DNC on Thursday night.

I wish to offer my sympathy for the death of your son, Captain Humayun Khan, who was killed in action in Iraq.

As a former US Army officer and a veteran of the Gulf War, I can certainly understand the pain and anguish that you and your wife endure every day.

Your son died saving the lives of his fellow soldiers. As Jesus told his disciples according to the Gospel of John, Greater love hath no man than this, that a man lay down his life for his friends.

Captain Khan is a hero. I am sure the soldiers he served with regard him as one. I know you and your wife do. Rest assured that millions of veterans regard your son as a hero as well.

To paraphrase from the Book of Ecclesiasticus, your son’s name liveth for evermore.

Your son made the ultimate sacrifice for his country, a country that was new to you and your family and one which you openly embraced and certainly love.

When you and your family arrived in America from Pakistan, you assimilated into our country. You adopted American ways, learned our history and apparently, you even acquired a pocket Constitution along the way. Good for you sir.

But, there are many Muslims in America who not only have no desire to assimilate but wish to live under Sharia Law.

That is unacceptable to Americans. There is only one law of the land. That is the USConstitution.

As you well know, Mr. Khan, we live in violent times, dangerous times. Muslim madmen from ISIS and other radical Jihadi groups are on murder and terror sprees across the globe.

Your religion of peace, Islam, is anything but that in 2016. That is a fact that is confirmed every time a Muslim shoots, bombs, beheads and tortures innocent men, women, and children. This does not mean that every Muslim is a terrorist, but most terrorists, sir, are indeed Muslims.

A Muslim terrorist attack has become the sign of the times.

Regardless of what the feckless, naïve, leftist ideologue Barack Obama and his dimwitted colleagues John Kerry, Francois Hollande and Angela Merkel state, the United States and the West are at war with Radical Islam. It is the job of the President of the United States to protect his nation from all enemies; foreign and domestic. Unfortunately, Mr. Obama romanticizes Islam and refuses to accept reality, which has resulted in the deaths of thousands of innocent people across the world.

Groups like ISIS and Al-Qaeda have one goal, the complete destruction of the Judeo-Christian culture, our religions and our way of life.

We don’t plan on letting our country be devoured by Muslim maniacs. We are Americans sir, and not unarmed, socialist European zombies. We will do what is necessary to protect the United States. While many Democrats and liberals see the world through rose-colored glasses, conservatives understand that there is good and evil in this world. Evil must be destroyed before it destroys us.

Strong measures, wartime measures, must be taken to protect this country from those that wish to annihilate us and our way of life.

Mr. Trump’s plan to temporarily halt immigration from Muslim countries that are known to either support terrorism or harbor terrorist groups is not only pragmatic but indeed it is constitutional. It is the constitutional duty of the President of the United States to protect this nation.

There is simply no way to vet hundreds of thousands of Muslim refugees from war zones like Syria, Iraq, and Afghanistan.

Europe is being destroyed because reckless leaders like Angela Merkel have opened the continent’s doors to a flood of over one million undocumented Muslims arriving with nothing more than a bad attitude and a haversack of Jihad.

Do you think Americans are stupid? While the left lives in a dream world, the right does not. Mr. Trump understands the threat to his nation and the threat, sir, is not from Swedish Lutherans named Anna and Lars. The threat, sir, is from Radical Islam.

How in God’s name are US immigration authorities supposed to know the true intentions of a 22-year-old Syrian man? It is impossible. You know it is impossible.

How in God’s name are US immigration authorities supposed to know the true intentions of hundreds of thousands of Syrian refugees and thousands of other sundry Muslims who wish to arrive on our shores?

Whether you, your wife, the Muslim world and millions of Democrats are offended by Mr. Trump’s realistic view of the world is irrelevant.

Whether you, your wife and son would have been prohibited from emigrating from Pakistan to America under Mr. Trump’s wartime plan is irrelevant. The security of this great land supersedes your desires and the desires of others who wish to come here now. The United States of America has no obligation to open its doors to placate foreigners and liberals in our government.

To adopt any other course but Mr. Trump’s would be a cause for further endangering the lives of Americans every day. That, sir, is unacceptable.

You attacked Mr. Trump in front of a worldwide audience, yet you can’t understand the fact that he defends himself against attacks from you, Hillary Clinton and the left. What else is one to do sir?

We must live in a world of reality, not a world of denial, delusion and fantasy the Democrats inhabit every waking day of their lives.

Radical Islam is the enemy of everyone on this planet who believes in freedom and justice. Until it is destroyed, this nation must protect itself from enemies both foreign and domestic.