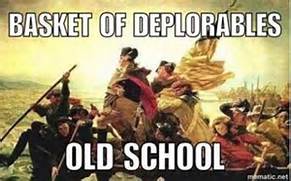 (Note: This is a substantially revised and highly personalized version of an email I recently received from a like-minded American Deplorable. I hope you will find it thought-provoking).

Because of those convictions and values I, and other like-minded Americans, are what a dishonest, twisted, and ruthlessly ambitious woman recently called a basket of deplorables.

Please help me come to terms with the new me, because I’m just not sure who I am anymore.

It’s hard to understand what’s happened to me—and so quickly! It is, in fact, strange that all of these momentous changes have occurred during the past eight years. I wonder why? What could have driven those changes? Hmm. I wonder…

And now, as if all these vicissitudes weren’t enough to deal with, Americans of both genders must be apprehensive about using public restrooms because of who or what they might encounter when they are in there.

I would like to thank all my friends for their patience and understanding as I went through these astonishing modifications in my attitudes and my principles.

Who knows? Perhaps if I had wrapped garlic around my neck or avoided wolfbane when in bloom this deplorable metamorphosis could have been avoided.

But that’s okay. Because for now I am quite comfortable coexisting in that basket along with millions of fellow American deplorables.