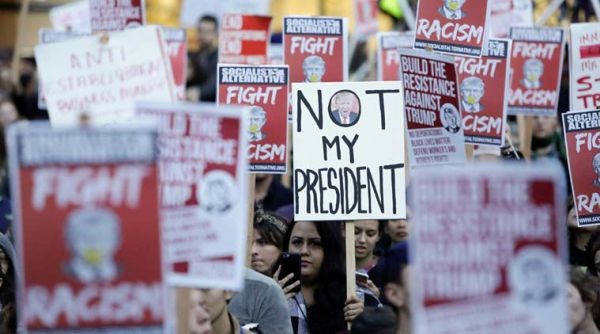 Last week in an interview with Oprah Winfrey, Michelle Obama said that with the Obama’s moving out of the White House and the Trumps moving in, America is a nation where hope is lost.

“We feel the difference now,” Michelle Obama said, referring to Donald Trump’s victory over Hillary Clinton. “Now we know what not having hope feels like. What do you do if you don’t have hope, Oprah?”

After eight years of her husband’s failed “hope and change” policies, more than 62 million Americans in 30 states sent a message that Obama’s dogmas failed miserably and Clinton’s promised plans were just as ruinous.

Yet, here was Michelle Obama, oblivious to the anger and frustration of millions of hard-working, middle-class Americans, insisting the nation is doomed. And naturally, Winfrey sat there nodding in fatuous agreement.

That inability to read the concerns and pain of middle-America is exactly what shot the Duchess of Chappaqua down in flames—and it’s why Obama will go down as one of the worst presidents in history.

Frustrated blue collar voters who are earning the same wages they did in 1988 rejected Clinton’s inflated sense of entitlement, the Clinton Foundation’s pay to play schemes, and the out-of-touch 1960s Haight Ashbury tenets that the zany leftists in the Democrat Party were attempting to shove down middle America’s throats.

I have news for those pathetic, whining left-wing cupcakes. Hope is NOT dead in America. It isn’t dead because the country finally elected a president who actually has the resolve and backbone to implement plans and strategies that will reignite a stagnant economy, restore American credibility in the world, and inspire people with opportunities and jobs that were crushed by Obama and his socialist minions.

And by the way, all of all of this blather about Hillary winning the popular vote is ridiculous.

First, the 2.8 million more popular votes that she won than Trump can be traced to two counties in a single state: California—hardly a nationwide voter mandate. Those votes single-handedly turned a Trump plurality into a Clinton plurality.

Second, a look at the map shows that Clinton won the populous states on both coasts such as New York, California, Oregon, Washington, Massachusetts, etc. but Trump won everything else.

In fact, Trump won 2,623 of America’s 3,141 counties. That means Hillary won just 489 counties in the entire country. Middle America, not the left coasts, determined the outcome of the election because those 2,623 counties accounted for 306 electoral votes.

Now that they have lost, Democrats naturally want to scrap the Electoral College. Sure they do. But the framers of the Constitution realized that to elect a president based only on the popular vote would disenfranchise those states with smaller populations and effectively bestow absolute political power on the minority of states that have larger populations, such as New York, Massachusetts, Pennsylvania, California, Oregon, and Washington, etc.

Talk about the end of hope.

That’s what the people living in those 2,623 mostly Midwestern counties that voted for Trump would think if they found their lives suddenly dominated and manipulated by left-wingers living in just 489 ultra-liberal coastal counties.

That’s precisely why the Electoral College was created—to eliminate the tyranny of a majority residing in a minority of states.

There never was any doubt that the electors would fulfill their obligation to elect Trump president yesterday. Of course, that didn’t stop the left from issuing death threats to some of the electors if they didn’t switch their vote from Trump to Clinton.

The litany of excuses for Hillary Clinton’s loss is mind-boggling.

First, it was the diabolical Russians hacking the DNC’s emails. Then, it was: “Trump is a Russian agent, a Putin puppet,” etc. Yawn.

Then, it was voter fraud in the states of Wisconsin, Michigan and Pennsylvania with Green Party candidate Jill Stein insisting Hillary may have won those states.

Ultimately, the recount in Wisconsin showed that Trump gained 131 votes over Hillary and federal judges in Michigan and Pennsylvania ordered recounts halted in those states because of a lack of standing by Stein. She was not personally injured by the election results, the two judges said, so there were no grounds for the recounts. Shortly after that the election results in both states were certified.

Another Democrat party attempt to discredit and delegitimize Trump’s election crashed and burned.

Here’s a thought about why Hillary lost: She was a flawed candidate. People didn’t like her, they didn’t trust her (for a good reason), they knew she was a liar, and the only message she had was “if you liked Obama and his failed policies, you are going to love me!”

Now, with Trump legally elected yesterday by the Electoral College, all that he needs to do to take residence in the White House is take the oath of office on January 20.

But shell-shocked Hillary supporters are not going quietly into the night. No, desperate liberal snowflakes funded by billionaire socialist George Soros have threatened to create chaos in Washington D. C. during the inauguration ceremony.