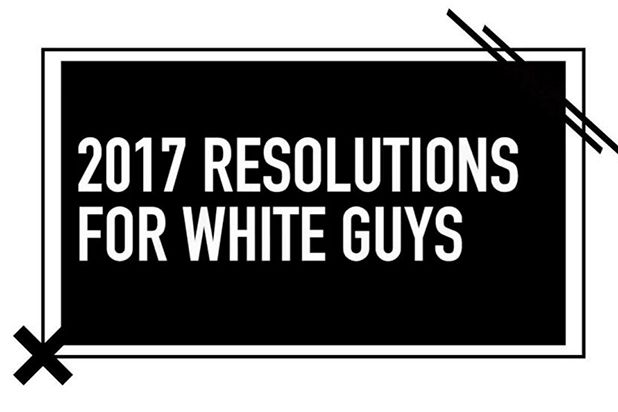 MTV released a video on Monday containing New Year’s resolutions for white men to consider in 2017 and social media customers were quick to condemn the video as “racist” and “pathetic.”

It is racist, and it is pathetic.

In an open entreaty to that ubiquitous liberal malady known as “white guilt, ” a cluster of smug and sanctimonious twenty-somethings look into the camera and tell viewers that white guys should “try to recognize that America was never great for anyone who wasn’t a white guy.”

Really? So the United States has always been an unexceptional land without liberty and opportunity for all? I see.

Perhaps that explains why millions of people have for more than two centuries flocked to our shores from every continent on the planet. They were simply eager to come to a disgusting country where angry white men oppressed them. Makes sense to me.

MTV’s video (which by the way, was taken down yesterday) implies that white men in 2016 are guilty of what? Of being white and being male, of course.

If that’s not bigoted and racist, then I don’t know what is.

Apparently, because the video targets white men, MTV and its lineup of inane nonwhite actors and one “token white guy” think it is perfectly okay to smear an entire class of human beings as racist, clueless and privileged.

And Democrats and their left-wing masters wonder why they lost the election to Donald Trump.

The premise of the video is this: If you are a male and if you were born white, then that is a sin against humanity. How dare you be born white AND male! One of those sins is enough. But committing both sins burdens you with “white guilt” and brands you as a legitimate target for hateful rhetoric from every ethnic, racial, and sexual minority on the planet.

Here’s a news flash for MTV and its mindless line-up of bigoted actors: Unlike many of our nation’s frightened, safe-space-seeking cupcakes, I don’t have ANY white guilt. None at all. Not a smidgen. Never did. Never will.

I wasn’t with Columbus in the 1490’s when he subjugated Native Americans. I wasn’t a slave-owner when slavery was legal in the 19th century. I didn’t attack Mexico in 1846 and appropriate much of what is now the Southwest United States from that country. I had nothing to do with creating the exclusion laws that barred Chinese from entry to America. Nope, I wasn’t around for any of those events.

All I have done to warrant such loathing from MTV is work hard in school and in my chosen profession, serve four years of active duty in the U. S. Army, and try to live my life as much as possible by the tenets of the Golden Rule.

So why do these fatuous boobs want to yoke me with White Guilt?

Perhaps it’s because, like a lot of like-minded Americans, I don’t believe in white guilt, but I do believe that All Lives Matter—not just black lives.

As Tomi Lahren, of the Blaze, said in response to the MTV video:

MTV News may have the lowest intelligence quotient of our mindless culture- shaping entertainment media, but its position is hardly distinctive.

I wonder if she included her biological father in that cheery death wish. Or perhaps she emerged fatherless from an alien pod.

Maybe it’s her well-known obsessive compulsive disorder speaking, but when she and other bovine hypocrites haughtily harangue “white guys” for imaginary crimes, such as being born white and male, it apparently has never occurred to them that just as being a white man does not impart any moral superiority, neither does being female, or black, or brown, yellow, red, gay, or lesbian.

If that notion makes me a depraved and debauched white man then so be it. I am not ashamed of my gender or my race, and I am sure as hell not saddled with white guilt.