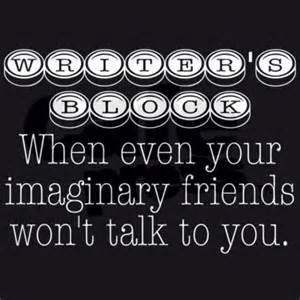 Anybody who writes, whether amateur or professional, at one time or another, will suffer from the dreaded condition known as WRITER’S BLOCK. It is an unavoidable component of the writing life.

Many writers have devised distinctive remedies for this constipation of the brain. They range from running as far away as possible their computers (or typewriter, if you still use one of those) to altering their schedules, so they write at a different time.

My remedy has always been to plow ahead through the impenetrable miasma and continue writing even if what emerges from my shattered brain is gibberish. I have found that even among the horse apples I produce there is occasionally a gem or two. But most of all the effort to keep moving, as it were, allows me to avoid total catatonia.

That approach may be because I spent most of my writing life as a journalist and editors simply don’t believe in writer’s block. They believe in deadlines, and they are anal about reporters meeting them. Excuses about a lost muse or a lack of creative juices won’t cut it—at least not in any of the newsrooms I ever toiled in.  If my brute force remedy fails to break the curse of writer’s block, then my next antidote is to read. I always have several books in various stages of scrutiny, and I have found that reading unblocks whatever is producing my cerebral constipation.

Many writers suffering from writer’s block say they take their minds completely off of writing and replace it with something else. They may travel and experience the real world and thereby escape their exhausted imaginations. They may binge watch a bunch of movies, have dinner with friends or family and listen to what others are doing, thinking, and feeling. Or they may do something they have been putting off doing, such as some household chore or project. Changing habits or routines can often get the creative juices flowing again.

“Over the years, I’ve found one rule. It is the only one I give on those occasions when I talk about writing. A simple rule. If you tell yourself you are going to be at your desk tomorrow; you are by that declaration asking your unconscious to prepare the material. You are, in effect, contracting to pick up such valuables at a given time. Count on me, you are saying to a few forces below: I will be there to write.” — Norman Mailer in The Spooky Art: Some Thoughts on Writing.

“If you get stuck, get away from your desk. Take a walk, take a bath, go to sleep, make a pie, draw, listen to ­music, meditate, exercise; whatever you do, don’t just stick there scowling at the problem. But don’t make telephone calls or go to a party; if you do, other people’s words will pour in where your lost words should be. Open a gap for them, create a space. Be patient.” — Hilary Mantel, Wolf Hall &  Bring Up The Bodies

“The best way is always to stop when you are going good and when you know what will happen next. If you do that every day … you will never be stuck. Always stop while you are going good and don’t think about it or worry about it until you start to write the next day. That way your subconscious will work on it all the time. But if you think about it, consciously or worry about it you will kill it and your brain will be tired before you start.” — Ernest Hemingway

“I learned to produce whether I wanted to or not. It would be easy to say oh, I have writer’s block, oh, I have to wait for my muse. I don’t. Chain that muse to your desk and get the job done.” — Barbara Kingsolver, The Poisonwood Bible

I will end with this bit of advice from British author Philip Pullman.

“Writer’s block…a lot of howling nonsense would be avoided if, in every sentence containing the word WRITER, that word was taken out and the word PLUMBER substituted; and the result examined for the sense it makes. Do plumbers get plumber’s block? What would you think of a plumber who used that as an excuse not to do any work that day?

“The fact is that writing is hard work, and sometimes you don’t want to do it, and you can’t think of what to write next, and you’re fed up with the whole damn business. Do you think plumbers don’t feel like that about their work from time to time? Of course, there will be days when the stuff is not flowing freely. What you do then is MAKE IT UP. I like the reply of the composer Shostakovich to a student who complained that he couldn’t find a theme for his second movement. “Never mind the theme! Just write the movement!” he said.

“Writer’s block is a condition that affects amateurs and people who aren’t serious about writing. So is the opposite, namely inspiration, which amateurs are also very fond of. Putting it another way: a professional writer is someone who writes just as well when they’re not inspired as when they are.” — Philip Pullman, His Dark Materials

I think Philip Pullman has nailed it.