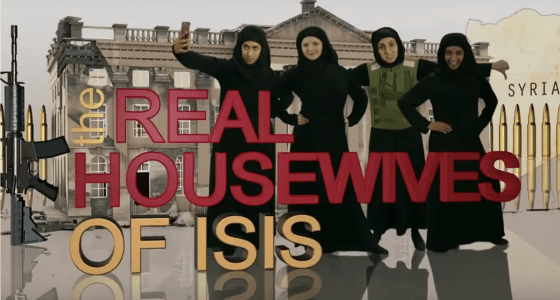 People in Great Britain are loopy about a skit entitled The Real Housewives of ISIS aired recently by BBC’s hit comedy series “Revolting.”

The skit, which is satirical and pokes fun at Muslim women, has engendered a firestorm of protest from the incessantly offended on one side (the hallmark of good satire) and rave approval from those on the other who see the skit for what it is: merciless British satire.

It’s the kind of satire that Donald Trump endures every week on Saturday Night Live or that Christians tolerate from secularists who liken them to a collection of pious zombies.

But heaven forbid that anybody pokes fun at Islam or the draconian tenets it imposes on women. For some reason, Islam has been deemed “off limits” to satirists and comedy writers.

London’s Daily Mail newspaper recently began gathering opinions on the controversial skit. They ranged from “bad taste, not funny at all” to “this is fantastic.”

Proponents insist (rightly so) that satire is supposed to confront and challenge sensitive issues. But the perpetually squeamish fear that depicting ISIS women Instagramming their friends in suicide vests (#OMG #JihadiJane) adds to “negative stereotypes of women wearing hijabs in Britain.”

But as the show’s supporters point out, if ISIS is in no way Islamic, as countless pundits proclaim, then why is ridiculing ISIS equivalent to mocking Islam and Muslims?

At the Guardian newspaper, Muslim comedienne and writer Shazia Mirza said: “Some people say that they are offended, some people are offended on others’ behalf, others are offended, and they don’t even know why. Being offended is very popular these days.”

Mirza added that “the rightwing press might be offended, and maybe leftwing liberals, but Muslims aren’t offended – it’s like they want us to be offended but we aren’t. We’re OK, thanks,” she says.

“There’s a long history of people from religions mocking themselves – Christians, Jews, Catholics – why can’t Muslims make jokes about themselves? If we are going to continue that proud tradition of satire, that has to be allowed.”

Meanwhile, some 38,500 people beg to differ. They have signed a petition to stop the BBC’s The Housewives of Isis, for “[pairing] our beautiful religion with bombs and guns.”

Once the petition opposing BBC’s “Revolting” show and it’s skits reaches 50,000 signatures, it will be presented to the BBC, Prime Minister Theresa May and Labor leader Jeremy Corbyn.

In the meantime, a tsunami of comments about the show and the skit are burning up the Internet in Great Britain—most of them for allowing the show to go on.

Here are few, both pro and con. After reading these, take a look at the clip below and decide for yourself.

Very funny, mocking this backward thinking/ideology (that should have been left back in the dark ages) for exactly what it is. Well done!

Brilliant!! 😁 Those ‘offended’ go and look up ‘satire’ in the dictionary. Try Gulliver’s Travels as a beginner guide. The ISIS fanatics will be sooooo angry. Cue Achmed the terrorist *look that up too*

Not quite sure what I feel about this – doesn’t seem right to me and I am not easily offended.

What a crack up. The old British humor is back! For all those offended, please go and watch some Monty Python.

What a disgusting and offensive idea for a show. On behalf of Britain, I can only apologize for this show and how it wrongly it shows people from different backgrounds.

Hilarious. The best way of dealing with these deluded idiots is mocking them. It’s not offensive it’s great British humour. The same was done with Hitler and the Nazis. Laugh at them. They hate not being taken seriously and people not being afraid of them.

I bet it’d be funny if it were Christianity they were offending. Well done, you believe in an invisible creature that cares more about two men hooking up than people dying of dehydration and disease. Notice, it’s Satire and shouldn’t be taken seriously.

This offends me as a vegan transgender Indian alien atheist German engineer who vapes organic decaffeinated compressed and hydrated soy breast milk on the regular and a person who does Indian naked cross fit yoga five times per week.

It would be troubling if Great Britain’s long tradition of stinging satire is somehow quashed by the relentlessly offended among us. In a world where everybody takes themselves way too seriously, we need the relief valve that comedy and first-class parody can provide.

Take a look at the clip below and let me know what YOU think.